There are times when a parent or both parents can’t take care of their child anymore. That’s when a third-party custody arrangement is often sought. Read on if you’re involved in a third-party child custody battle or you think one may be happening soon.

When a couple divorces, it is not uncommon for one parent to try to keep the child away from the other parent and his or her family. This can occur when a mother or father refuses to allow the child’s relatives to see the child.

Child custody – which is now known as Allocation of Parental Responsibilities – disputes are often resolved through mediation or negotiation, but if these attempts fail, then litigation may be necessary. The court will make a decision regarding custody based on what is in the best interests of the child.

Third-party custody is when a court gives legal and physical custody of a child to someone who is not a biological parent. This person is sometimes called the custodian. Here’s what you need to know about third-party custody rights in Illinois and how Masters Law Group can help.

What is Third Party Custody?

While many child custody disputes occur between the parents of a child, some circumstances exist where a third party non-parent, such as a grandparent, aunt, or uncle, may seek custody.

Often, a situation arises in which neither of the child’s biological parents is able to care for him or her. It then becomes necessary for a non-parent to take legal steps to be appointed guardian or custodian of the child. This could be due to a single parent being incarcerated, suffers from mental health issues or are physically unable to look after their child.

Under Illinois law, the court prefers for a child to remain in the custody of one or both of the child’s parents. However, if the parent is unfit to care for the child pursuant to 750 ILCS 50, then the court may regard awarding third party non-parent custody as in the best interests of the child.

If the child is removed from his or her parents’ custody and/or if his or her parents voluntarily relinquish their parental rights to him or her, then there are several other situations in which third party non-parent custody may be considered for that child. These include:

When a child custody lies with a fit parent, the chances of a third party non-parent seeking custody may not be as successful. To show a parent is unfit, they must meet one or more of the following criteria:

The court will almost always give preference to the parents’ wishes concerning visitation with the child. There are certain cumstances that will warrant a third party non-parent seeking visitation rights from the court. A third party non-parent who seeks to obtain visitation privileges must show that he/she has a significant relationship with the child. If that is the case, then they would have a better chance of warranting such an order.

In all but the most extreme cases, parents have full discretion over how to raise their children. If a parent decides they do not want their child to have a relationship with their grandparents, that is legally within their right unless it would cause physical, emotional, or mental damage to the child.

In Illinois, legal custody is considered parental responsibility which automatically defaults to parents making a decision. Grandparents can only receive custody if they meet the following criteria:

Grandparents must be able to back up the following with evidence such as police reports, medical records, photos, and other documentation. It is always important to consult with an experienced family law attorney before you proceed with pressing any legal charges against the parents.

Oftentimes, child custody and visitation topics can be highly emotional issues. Disputes over third party non-parent visitation can be difficult. Because of this, the experienced attorneys at Masters Law group can assist you with third-party custody litigation.

Protecting the child and their best interests should be your number one priority regardless of which side you are on in this situation. If you or a loved one would like to know more about third party custody in Illinois, contact Masters Law Group here today. 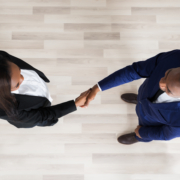 What is Divorce Mediation?